A vibrant destination for entertainment, sport, culture and recreation

Repurpose the Royal Hall of Industries

Due to significant financial impacts from COVID-19 the PlayOn Group has surrendered its remaining 26-year lease over the iconic Hordern Pavilion and Royal Hall of Industries in Moore Park.

The lease, which commenced on 1 May 2019, would have seen both buildings given new life as part of a $70 million capital works and investment program.

The adaptive reuse of the Royal Hall of Industries would have established the Sydney Swans HQ and Community Centre – a new home for the Sydney Swans and a future Swans women’s team, the QBE Sydney Swans Academy, the NSW Swifts, GO Foundation, Clontarf Foundation and an Australian Red Cross Blood Bank donation centre.

Playbill Venues had planned to continue its long-term management of the Hordern Pavilion, one of Australia’s most iconic live music venues. The building would have received significant upgrades under the planned refurbishment.

Working with the NSW Government and Centennial Park and Moore Park Trust, the PlayOn Group’s lease has been terminated effective 15 April 2020.

The PlayOn Group is extremely disappointed by the termination but believes it would be imprudent to continue with such a large-scale project given the significant financial challenges presented by the current pandemic. However, the PlayOn Group remains optimistic that there will be an opportunity in the future to realise the original project aspirations. 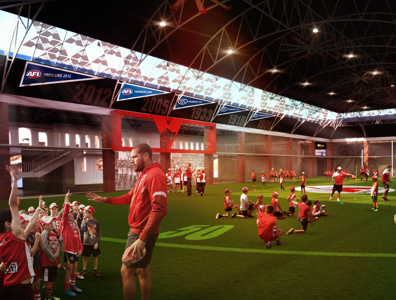 The Royal Hall of Industries

A substantial capital works investment will see the Royal Hall of Industries become the Sydney Swans HQ and Community Centre and new home of the NSW Swifts. This infrastructure will take the Swans into the future. It enables the Club to expand its youth academy and establish a women’s team. The Royal Hall of Industries will also welcome co-tenants: the NSW Swifts, QBE Sydney Swans Academy, Australian Red Cross Blood Service donation centre, GO Foundation and Clontarf Foundation. In addition to a cafe and museum, the new Centre will house an international standard netball court and a multi-purpose recreation and function space, which will be accessible to the community. 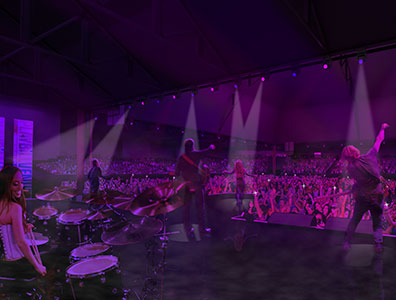 Sydney’s iconic venue will benefit from a major renovation to protect and enhance its role as a premier live music and entertainment venue. The significant upgrades will deliver an improved experience for patrons and performers and offer greater flexibility for a wider variety of events and performance options. The work will ensure the Hordern retains its status as a first-choice event venue at the heart of live entertainment in Sydney.

Share your feedback or enquiries with our stakeholder consultation team via engagement@urbis.com.au or 1800 244 863. 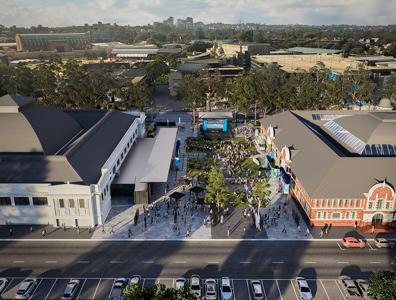 We will establish a new outdoor public entertainment space between the Royal Hall of Industries and the Hordern Pavilion. Existing fences will be removed, and the area will be connected to Sydney’s light rail to create a new gateway to the Entertainment Quarter. This shared forecourt will become a destination in its own right with year-round sport, cultural and recreation activities.

Share your feedback or enquiries with our stakeholder consultation team via engagement@urbis.com.au or 1800 244 863.

A new home for  high-performance and community sport